RSS
← Mismatch! When You and Your Job Collide
Help Me Understand! → 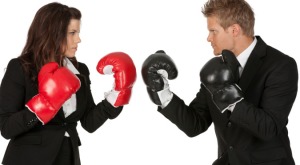 A friend of mine who owns his own business recently described a situation which perfectly illustrated how extroverts and introverts tend to handle conflict.

He was in the process of trying to counsel a salesperson whose style was creating a lot of conflict in the organization. This sales rep, only recently hired, had all the right credentials and was apparently bringing in lots of new business — but the style of this individual, hard-charging and abrasive, was causing major cultural problems. The boss explained how bad things had gotten. “When you come into a meeting,” he told the offending employee, “all the extroverts put up their dukes, and all the introverts head for the door!”

This idea that extroverts tend to wade into conflict while introverts are strongly conflict-avoidant is nothing new. But the idea bears some further scrutiny. In my work experience, just as (I suspect) in yours, I’ve had bosses who appeared to relish conflict, not only enduring group tension but (knowingly or otherwise) seeming to encourage it. Sales meetings with these bosses were a kind of Rorschach Test, bringing out the deep emotional baggage in the entire team. Some employees (the extroverts) almost literally rose to the occasion, the adrenaline pumping, while others (the introverts) looked like they wished they could crawl under the table, or disappear — anything to get out of the room!

At the other end of the spectrum, I recall a few conflict-avoidant managers, so prone to sidestep and evade that it drove the team crazy — introverts and extroverts alike. I probably fell into that avoidant trap too many times in my career. To all my former colleagues — sorry about that. When a conflict would arise, even when the solution was painfully obvious, the boss was nowhere to be found, and the problem would inevitably fester.

As I reflect back on those experiences, I think there’s a lesson for any of us who manage a team. If you’re a sales manager, a director of development, or the boss of any sort of group of colleagues where good, solid, productive relationships are paramount, be very aware of how you personally handle conflict. Be equally cognizant of how different members of your team handle it. If you’re the extroverted type who thinks plenty of conflict is healthy, beware of the effect all that workplace angst is having on your introverted colleagues who may think your red meat brand of conflict management borders on the hostile. Are they heading for the hills instead of engaging in the work of strengthening the team? At the same time, by encouraging conflict, you might be teaching your extroverted teammates an unhealthy lesson, showing them how to feed conflict and not how to resolve it productively and effectively.

Conflict-avoidant managers, you may be under the assumption that your team is free of angst, but I’ll bet my next commission check that it’s just not so. Peace, as the old saying goes, is more than the absence of conflict — much more. Peace implies emotional health and wholeness (which is the connotation of the Hebrew word “shalom”). Avoiding conflict in hopes that it will go away is like putting a Band-Aid on a splinter: it hides the problem without solving it.

Let’s help the extroverts on the team put down their dukes, and the introverts stop their mental exit. Let’s resolve conflict in appropriate ways so the team can function like a good team should. And, boss, if you have an employee who refuses to get on board, maybe you need to have the same chat my friend had with his salesperson. Good sales numbers are all well and good, but in a healthy organization, the culture matters. Once you lose that strong, healthy organizational culture, you’ll have a really hard time getting it back.

← Mismatch! When You and Your Job Collide
Help Me Understand! →