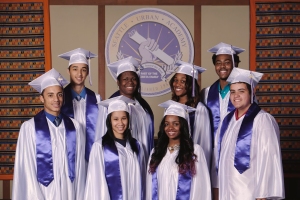 His name is Jesse. That’s him in the back row, left hand side.

Jesse’s life has included a whole host of economic, social and academic challenges. When Jesse was in his former high school, a big, suburban place, he says he was that kid in the back of the classroom, slouched in his seat, never making eye contact, never contributing, and barely passing. He was the one teachers didn’t think would make it, the one sure to drop out and become yet another statistic. But then something dramatic happened: Jesse changed schools. He came to a much, much smaller place called Seattle Urban Academy. There in that more intimate, more individualized, more personalized environment, he began to shine. The bright young man hidden behind that veneer of past academic failure slowly began to show himself. Jesse became the eager, interested, funny, inquisitive person he always had the potential to become. Just a few weeks ago, he wore his cap and gown and received the high school diploma he had wondered whether he would ever receive — and now he has his sights set on a career in web design.

Jesse’s story is a classic failure-to-redemption tale. Each of his classmates could describe a similar personal voyage. What changed? Well…in my view it was a whole host of things — but it boils down to the Power of Possibility. Jesse came to an environment where — for the first time — he was exposed to a world of bright options for his future, and he was equipped with the tools to turn those never-before-experienced dreams into reality.

Please don’t misunderstand:  by “the Power of Possibility,” I’m not suggesting you put a picture of a Ferrari on your refrigerator. Frankly I don’t place much stock in the mystical power of visualization. I would simply submit that, for any of us to achieve anything worthwhile, we first have to (a) know what positive things the future could hold and (b) believe we have a realistic chance of attaining that future. For Jesse, struggling at his former high school, the future looked bleak, holding little if any prospects for a rewarding and successful life. He was mired in the trap of perceived failure. When he came to SUA, for the first time he began to see that he was smart, not dumb, and capable (with hard work) of achieving real academic success. Not only that, but he was also surrounded by teachers and tutors and fellow students who believed in him and who were standing by to help him along the way.

Jesse spoke at his graduation ceremony. He said, “Some people … said we wouldn’t make it. We, as a family, stand here to say they are wrong. We turned our failures and struggles into our means of success.”  The crowd responded with tears and cheers.  The road for students like Jesse is seldom smooth, and some of these young men and women have had a lot to overcome. But thanks to the Power of Possibility, combined with the magnetic pull of a clear and compelling vision, academic failure is transformed into forward motion, strong achievement and ultimate success.

For you and me the lesson is clear. We may not face the kind of challenges a young man like Jesse has had to face, but nevertheless we may find ourselves mired in a self-imposed attitude of chronic failure. Maybe you’re the manager of an employee or even a team who feels that way. Maybe it’s a spouse or adult child or a close friend. The Power of Possibility means that a strong, affirming vision can begin to propel us forward. Yes, we may need to swallow our pride and become part of a support group that will help us along the way — this isn’t supposed to be a solo journey. But we can do it. And if I start doubting the Power of Possibility, I’ll think of Jesse.

Henry Ford said, “Whether you think that you can, or that you can’t, you are usually right.”  Good point.